Love’s Kitchen is about Rob Haley (Dougray Scott), an up-and-coming chef and restaurateur in London, is grief-stricken when he loses his wife. With encouragement from his infamous friend and real life TV Chef Gordon Ramsay, Rob decides to spice up his life by turning a run-down country pub into a gourmet restaurant. His food catches the eye – and taste buds – of beautiful American food critic, Kate Templeton (Claire Forlani) and they soon both write a recipe for love that leaves both their hearts – and their stomachs – full.

How did the characters meet?

Rob met Kate when he went to The Boot to inquire the owner if the place is still free.Kate is a food critic and a regular visitor of the place and she told the owner he shouldn’t sell it.

Apparently, Rob has a strong dislike to food critics due to his previous experience before. So he immediately acted like a wounded jerk to her the moment they met.

How the characters in the movie are attracted to each other?

When Rob officially opened The Boot, an incident led Kate and Rob to start a deal that led to a friendship and something more.

The attraction wasn’t apparent when they first met, the second time they encountered each other, that’s when they became friends and slowly got to know each other.

In the movie, it is not love at first sight or even lust because Rob is still hung up on his dead wife while Kate didn’t really showed interest in him.

The way they see each other only changed when they started the deal and when Kate tasted the meals he made the second time around and his special trifle.

Was there chemistry between the couple?

What’s great about this couple for me is that their chemistry is a good balance between *intellectual, *sexual and *romantic chemistry.

Intellectual because they connected through food.

Romantic and sexual chemistry started to develop as Kate spends more time with him and his daughter, Michelle.

If you read my relationship analysis posts all the time, you’ll notice that I didn’t go very specific with them.

When people are faking and forcing chemistry on screen, you can get very specific on how the couple tried to act like they have chemistry.

But the chemistry here is so real and natural, it’s sexy subtle. Throw in a little trivia here, I’m probably wrong, but the main actors playing Rob (Dougray Scott) and Kate (Claire Forlani) is married in real life. I don’t know the whole story so if you’re curious, you can tell me about it.

What is the man’s *lovemap? Is it healthy or not?

The man’s lovemap became unhealthy after his wife died. He refuses to take risks in life. Aside from his wife’s accident, he’s deeply traumatized by the critic, he got that at first he refuses to take a risk on The Boot and getting publicity for The Boot.

It was Kate who had changed things around him. She somehow influenced him to take risks and to resolve his issue with food critics.

My favorite dialog from him to Kate are:

You’ve got to take risks once in a while.

You reminded me of who I was and who I’m supposed to be and what I could be.

Everything has changed because of you.

What is the woman’s *lovemap? Is it healthy or not?

Kate has a healthy lovemap because she is sensible, straightforward, mature, independent, responsible, dominant, proper, does the right thing and has a great sense of humor. Well, you might notice that I’m praising Kate so much, but she’s not perfect. She wasn’t brave enough to confess to Rob that she gave him a bad review years ago.

The movie didn’t focus much on Kate, but if you watch her character. She is so well put together. Yes, she is also sarcastic at some point, which sometimes I find charming and annoying in some parts of the movie.

The great thing about her is she influenced Rob in a big way and even her father. I love her conversation with her Dad when she told him that not everything is about him and how he had hurt her when he fooled around for a while.

I’d say, Kate’s personality contributes a lot to Rob’s personality. In fact, in the movie, she may responsible for his failure, but it’s also her who did him a lot of favor.

Yes. Rob is an introvert while Kate is the opposite. Kate is mature, responsible and a risk taker, but Rob sometimes needs a push to do things.

As for Kate, Rob can tone her impulsiveness and her quick judgment at times.

Are they capable of maintaining a long-lasting relationship?

As long as Rob will stop acting like a bloody fool, a wounded failure, and a jerk. And as long as Kate will have a patience for him and continue giving him stability by being the traits I mentioned above then they will be fine.

Why the relationship will work and last longer? Why not?

The relationship will last because they are both open and straight to each other when it comes to their thoughts,  opinions, and actions.

Well, if Rob acts like an immature, wounded failure and by bringing up the past, and if Kate loses her patience over him, then the relationship won’t even work.

If you’re looking for a movie with foods that will feed your eyes and your taste, unfortunately, that’s not the focus of the movie, it’s the romance, personal growth, and healing. The movie has some bad reviews, but I don’t really care about them because what I care about is the quality of the relationships in movies. It’s a feel good movie with its own charm, funny moments and characters with some growing up lessons and second chances in love.

What’s the point of having a cool plot, explosions, and expensive movie budgets, if the developed characters and relationships are crappy and actors are wrong for the characters? Right?

*Thusly marked words are defined on this LINK.

Northern Lights is a novel by Nora Roberts adapted to a movie in 2007. Nate Burns accepts a job as chief of police in Lunacy, Alaska, hoping to get away from the traumatic death of his partner back in Baltimore. He meets Meg, an independent bush pilot, whose father is found dead in a mountain cave. 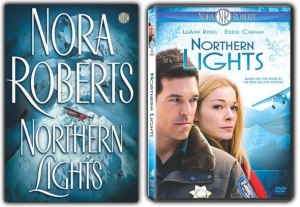 Let me first make a statement that I won’t factor in what probably went on behind the scenes because I don’t want to emphasize  or glamorize it. But it might have/ might not contribute to the relationship of the characters in the movie.

Was it love at first sight?

I haven’t read the book yet, but what a way to build up tension and emotion between the characters. Yes, there’s love at first, and second sight before they finally met. It was captivating and magical to watch.

Is there chemistry between the couple?

There was * sexual chemistry the moment the couple laid eyes on each other and just every time they were together. It was just sizzling between them.

Yes, there’s also * intellectual chemistry with the way the couple engages on their verbal spar.

The actors who played the characters has a great chemistry and compatibility. Those roles were truly made for them. They were perfect for the roles.

Did the couple’s personalities balance, and complete each other and makes them a good team?

Nate seemed to be passive introvert which matches Meg’s extroverted and straightforwardness.

In such a short time, the couple somehow bonded and slowly got to know each other. Their relationship in the movie would seem fast phase, but not necessarily. Instead, their interactions together and working together comes out naturally.

Nate and Meg brought out the best in each other. It helps that Meg is so straightforward and she tells him what she thinks of him, she taught him different perspectives, and how things seem to other people’s eyes.

What is the man’s *lovemap? Is it a healthy lovemap or not?

Nate has an unhealthy lovemap due to his past relationship. His ex-wife cheated on him. Aside from that, he’s got an issue because he believes his partner died because of him. It’s normal for him to think that way, but it’s an unhealthy thought because he wasn’t the one who shot his partner.

I did love the part about him where he didn’t flirt with other women, he only did his job, and he only had eyes for Meg. He wasn’t a jerk to the other women on the show, despite them showing interest toward him.

What is the woman’s *lovemap? Is it a healthy lovemap or not?

Meg has an unhealthy lovemap because of her mom’s influence and because she grew up believing that her Dad left them.

While her mom sleeps around and never gets serious with any guy she meets. Meg is scared to fall in love  because she’s afraid that the guy might leave her too.

There’s a scene where she asked her mom, how could she love her Dad, despite everything, but her mom just answered, it was true love and she gave her heart to her Dad. Once you find that kind of love, you never let it go.

Another great scene with her mom is when she asked Meg if she loves Nate, and Meg said yes. Her mom gave her an advice, “Then marry him and hold on to that feeling for the rest of your life. Hold on to it hard.”

And in return, Meg pushed her mom to take a chance on John. A guy who’s always been in love with Meg’s mom.

Despite their issues, finding out Pat’s (Meg’s dad and Charlene’s husband) death, brought closure to Charlene and Meg and helped fix their relationship.

Meg is a commitment phobic and stays away from guys, but she can’t resist Nate’s connection with her. In fact, she’s very selective with her interactions with other guys.

How lovemap plays in the couples’ lives?

We know that Nate has a healthy lovemap, but he’s got an issue with this past regarding his partner, but Meg told him that he can’t live his life that way, that he can’t run away. She also convinced him to talk to his partner’s ex-wife and when he did, he finally fixed his issue and it let him have a fresh start in his life with her. Meg is a strong force for Nate, she encouraged him to make a decision and to fight hard for what he wants and loves to do in his life.

Now, as for Meg, Nate is a catalyst in her life. Meg has been already a strong and independent woman, but she found a guy who is interested in her, who is concerned for her and her well-being, someone who  can be a source of strength for her and a sounding board for her thoughts, and concerns. He gave her stability, security, and commitment. So he also set her lovemap right. At the same time, he somehow helped heal Charlene and Meg’s relationship.

Here’s a review from someone who have read the book and watched the movie.

Despite what went on behind the scenes, like she said, read the book and watch the movie. It’s a great simple story.

*Thusly marked words are defined on this LINK